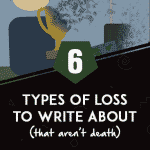 In real life, the death of those close to us is one of the most impactful events that can befall us. It’s devastating and terrifying and unsettling all at once; slapping us in the face with the colossal mindfuck that is human mortality. Not surprisingly, mourning a loved one is among the most universal experiences that mankind has to offer — and for your writing, that’s not always a good thing.

When done right, facing loss can be a powerful way to flesh out your characters, forcing them to fill whatever hole has been left in their lives. Someone’s death, however, is so big, so all-encompassingly impactful, that there’s only a finite number of ways for your characters to react. Whether it’s sadness, anger, denial, relief or even oh-so evil indifference: chances are your readers have read it a million times before.

While there are certainly fresh takes to be written, it’s good to have more than one type of loss in your arsenal. So without further ado, here are more six more meaningful types of loss to flesh out your characters.

To the cynic, a home might just be a series of bricks glued together, but it often represents so much more to your character. It’s their center of the universe, in a way: the comforting constant that they start and end their days in. Whether it’s a childhood home filled with memories or the place they put on their wedding gown: losing a home means losing a part of your life.

And that’s sad, yes, but it also offers plenty of room for your characters to grow. By taking away their comfort blanket, you’re forcing them to deal with being constantly on the spot; relying on loved ones or strangers or their own wits to get by. They’ll have to build something from the ground up, literally or metaphorically — and in the process, they might just learn about the things that really matter.

For many of us, our health is something we often naively take for granted — until it is suddenly taken away from us. Whether it’s a stroke, a sword fight injury or the physical toll of pregnancy: changes to your character’s health can significantly alter who they are as a person.

A physical trauma, for one, might force them to rely on their wit, charisma or strategic mind. It could push a loner to accept help from the people around them, or cause a career politician to reconsider their priorities in life. It might come with a sense of entrapment, or compassion, or a renewed appreciation for life — if you know your characters well enough, there’s virtually endless avenues for you to explore.

“So what do you do?” is often the first question we ask a new person, and that’s certainly no coincidence. Whether you’re an accountant, an old-timey blacksmith or the architect of the Death Star’s thermal exhaust port: more often than not, what you do is most of who you are.

When someone is fired, retires or even manages to sell a successful company, there’s often a small identity crisis to go along with that change. Your character might be forced to focus on themself as a person; to reevaluate who they are outside of their line of work. They might discover new strengths, or new passions, or rekindle old friendships — once more, there’s tons of ways you can go.

Yes, kids are a blessing to most parents, but even the cutest, most spherical baby is a life-changing event. There’s a whole new person you’re responsible for, and that often means sidelining travel plans or childhood dreams, or even just the carefree idiot inside.

Though it’s easy to overlook what’s been left behind, there’s plenty of interesting ways for your character to change. They might become less selfish, sure, but also more anxious or impatient or just plain-old exhausted. And if there’s two parents in the picture, their relationship is bound to change in very profound ways too — meaning that growth-wise, you’re hitting two birds with one baby-shaped stone.

5) Losing touch with a loved one

It’s something we’d rather not think about, but loved ones don’t have to die for them to vanish from your life. Whether it’s an unpleasant breakup, a child refusing contact or an elderly parent forgetting who they are: there’s plenty of ways a loved one might fade from your character’s life.

That’s a traumatic event to be sure, but it does force your character to explore who they are outside of their relationship to that person. It might reveal the man behind the boyfriend, or the woman behind the mother — or even the father behind the child.

Whether it’s a politician involved in a scandal; an athlete passing her peak or a queen eyeballing a new fairest-of-them-all: falling from grace can have a profound impact on those used to being at the top. It forces your character to find validation from the inside, rather than from whatever swarm of adoring fans they used to have.

They might stick to their guns and try to get back on top, or admit defeat and focus on reinventing themselves. Perhaps they’ll find a connection to the people they used to look down on, or find relief from the pressures they never knew weighed on them. Again: there’s many directions for you to explore — and many exciting stories to be told.