As a writer, being faced with a blank page can inspire either crippling fear or wonderous anticipation — or both! In this writing series, we’ll be discussing the ways we can generate some ideas to get started — because though I love and worship the good ol’ imagination machine, I’ve found that mine can be somewhat unreliable at times. A year or so ago, I was assisting a local poet in running a young writers’ group. With a group of 14- to 18-year-olds, we tried out a people watching exercise that I’d like to share and expand.

For as long as there have been writers, there have been people-watchers. We are those who like to frequent bustling places, but sit back unobserved themselves. We listen to snippets of conversations, note down the atmosphere, the impact of the place upon the senses. Whilst generic listening-in is always a fantastic exercise, I have a few suggestions to direct you on a more focused venture into the wide world.

You may have seen this before, as you’re walking down a boulevard in some tourist-centric seaside town, and there are artists scattered here and there, selling their work. You hand over your money and you sit on his chair, and within five minutes he’s handing over a finished portrait. Except when you look at it, all your flaws and prominent features have been made even more prominent. Your head is enormous compared to your body. Your thick eyebrows look as though they’ve been dragged through a hedge backwards. Every mole, every bum-chin, every single thing has been exaggerated by the artist’s hand.

Your writing task is to do just that. Find the caricatures in the crowd, and exaggerate them even more. What makes people distinctive? You might notice someone’s bright clothes, their slicked-back hair, their large shoes. Think of Professor Snape: his physical appearance is defined by his greasy, long black hair and his hooked nose. Look around you: do they have defining features? Make them a defining description.

Though a picture tells a thousand words, sometimes all it takes is a single word to give a lasting impression. As a speed exercise, describe each person you see using only one word. Though I suggest you do this quickly, that doesn’t mean you don’t consider it carefully. Generically describing someone as ‘blond’ is bland — make it unusual, make it evocative.

This one word could be something distinctive about their appearance, similarly to how we described the above caricatures, but it could be something else; perhaps it’s the way they hold themselves, how they move, the tone of their voice, the emotion they project. Perhaps it’s even something you suspect they enjoying outside of wherever you’ve chosen to set up camp. Imagining how someone behaves with their co-workers, for example, and summoning them up with that one word can be an interesting task.

Evasive. Stilted. Cruel. Buoyant. Push-over. Pretentious. What starts as a single word can blossom into a backstory that is much richer.

This is an especially fun one for those who want to work on their dialogue. Sit nearby to someone and listen to their conversations. Who dominates the talk? How do they pause, how do they interrupt one another, or ask questions? Do they finish their stories? Do they waffle or are they concise? If you’re able to write fast, jot down some of the phrases and back and forth.

Another approach to this exercise is to find the one-sided conversations. These could be people on the phone, or even someone who’s more talkative than their friend. Can you fill in the gaps and respond to what they’re saying? Can you imagine one of your ready-made characters (or even a famous fiction character) responding?

Let’s use Snape again — would he allow someone to dominate a conversation? I’m quite certain he always like to be the most intelligent one in the room, though he’s very guarded. Perhaps he would listen to their rattling on, only to respond with a single sentence and K.O them with his words. As you’re listening, decide whether or not this is a dominant or passive character. Make note of some of their phrases or even accents; when you come to write something later on, you will be in a better position to remember their tone and try to replicate it.

4) The head to toe approach

As a literal exercise in public, this would cause quite a scene, so you’ll need to restrict this one to your imagination.

Imagine you have a huge stack of post-it notes. On each one, you need to write something unique, without repetition or synonyms. Then describe them from head to toe. In your mind, cover the person completely with those individual descriptions until there’s no space left whatsoever. Obviously, you shouldn’t approach strangers to do this, but perhaps you could find a willing muse.

Just don’t ruin your friendship with unsavory descriptions — it might be best to do this one with your dog.

Once you’ve been people-watching a while and have got some imaginative notes down for a variety of strangers, take them from their real lives and make them something new. Or, in other words, pair them up.

They could be in romantic relationships with someone across the road from them. They could be family, or enemies, or colleagues, or neighbours, or visiting aliens in disguise. What makes this even better is that you can give them any personalities you want, based on your observations. Will these two be compatible? Or will it be a complete mess? What are their goals for this scene, and will they achieve them with the other person in the way? Create a scene with at least two strangers, detailing the circumstances in which they meet or associate.

This post was originally published on the author’s personal blog. 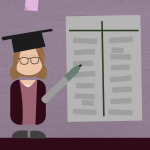