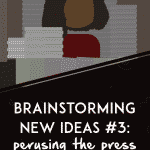 It’s almost a guarantee in our media-driven world, that anything weird and wonderful will be covered in the press. Journalists are always on the hunt for content, and so they hungrily seek after anything that they can spin into an entertaining story.

How does this help us fiction-writing folk? Newspapers don’t just publish anything about anyone; they look for headlines that will hook you in. They look for scandal; adversity; out-of-the-ordinary. The material you’ll find in newspapers is an excellent starting point to spin off your own tales and weave a web around their initial stories.

But of course, rather than just leave it at that, I’ve come up with a few ways to help you structure your searching and generate some compelling new ideas.

1) Spin the mundane into an exciting headline story

I had a seminar with an ex-journo recently who talked about the ways journalists find their material. Her inbox would be inundated with hundreds of emails from people trying to get their businesses featured, with subject titles like:

Now, for the person whose company that is, it’s exciting and tense and risky and full of brilliant stories. For someone on the outside, however, it’s boring. They have no personal investment, and therefore no personal interest.

So what would make it more interesting? Something incredible or out of the ordinary needs to happen in order for the average joe to be drawn in enough to read. The writing exercise: take an average story and spin it into something exciting as an initial story idea. For example, this might be a little bit more interesting:

‘Ex-professional-boxer comes out of retirement to open a bakery.’

Already, we are compelled to know more, and the questions we now ask can drive your idea generation. Why is the boxer opening a bakery? Is it a male or a female boxer? Do they need money? Why? What is the bakery called? Take these questions and make them more ridiculous: has the boxer gotten into such deep gambling debt that the mafia has forced him to open a bakery that’s a front for arms dealing?

2) Create a backstory for an over-the-top headline

Even normal headlines can conjure some interesting questions, let alone crazy ones. If journalists are stuffing their main pages with the out-of-the-ordinary events that hook us in, there must have been a lead-up. Let’s take an example:

Yes, this is a genuine headline… the mind baffles. The writing exercise: take an unusual or strange headline and think of the very human lives that led to that moment. Why did she need or want to steal? What was the shop called? Was it the first time she’d stolen? Did she have a specific reason to dress in a turkey costume? Did she wear it especially to shoplift, or was this her everyday attire?

Sometimes, even the strangest stories have ordinary beginnings — in a way, this is the opposite of the first exercise: where before we took normal situations and spun bizarre backstories, here we take the bizarre and make the ‘characters’ more human.

Now, the natural inclination is to focus a story on the contractor, but let’s look at the wider story that centers on this event. The writing exercise: consider the other people involved in this story and tell it from their point of view.

You could write from the perspective of one of the scorned customers and their crusade to recover their money. Or you could take it one step further, and write the story of the contractor’s grandmother, who is now the subject of ridicule at her weekly ‘Ladies who Lunch’ club. You might write about the life of the judge who now has to deal with him in court. You could write about a rival business owner who is now swooping in to reap the benefits and can finally afford to buy his kid the bike he’s wanted since last Christmas.

What I hope you see, is that the possibilities really are endless.

This post was originally published on the author’s personal blog.