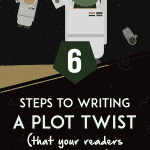 Whether it’s Ned Stark’s fate in A Game of Thrones; Darth Vader’s lineage in Star Wars or some scruffy old rat secretly being a grown wizard: plot twists can send shockwaves across your audience and beyond. When done right, they keep your reader on the edge of their seat as your story unfolds before them — but when fumbled, they can induce every variety of cringe in the catalogue.

As a writer, plot twists are all about nailing the sweet spot. You don’t want your readers to see it coming from a mile away, but it shouldn’t come completely out of the left field either. A perfectly executed plot twist is one that your reader didn’t see coming — but that in theory, they could’ve. Here are 6 steps to achieving just that.

Here’s a little secret about your readers: there’s a considerable chance your book isn’t their first-ever. What that means for your plot twists is that while you’re working you way up to the ol’ switcheroo, there’s going to be dozens of stories-past clamouring in the back of their head.

As a writer, it’s tempting to whip out the same plot twists that have been proven to work in the past. After Star Wars, we saw a rapid increase in bad guys being the protagonist’s dad. After The Sixth Sense, a whole generation of mentor characters turned out to be dead the entire time. They were great the first time around, sure, but not quite as impactful on their 168th encore.

Now, don’t get me wrong: just because someone else has pulled a similar twist before, doesn’t mean yours is necessarily bad. What it does mean is that you might want see if you can take it one step further — to put a twist on the twist they’re expecting.

To make sure a twist feels fair and earned, it’s essential that you give your readers a fighting chance to figure it out. Your job, then, is to sprinkle clues throughout your novel; offering just the slightest hint of what’s about to hit the fan, without telegraphing every twist and turn.

There are a number of ways to do this. Sometimes, it’s about simply keeping the puzzle pieces small; spreading your twist among lots of tiny hints that won’t seem much unless combined. A flickering light could just be overdue maintenance and a half-smirk could just be some arrogant prick — but put them together, and they could very well be the beginnings of an intergalactic conspiracy.

Other times, hiding your plot twist in plain sight can be an excellent way to deceive your audience — reveal a murder clue in the background of your romantic subplot, or hint at the government being overthrown in your description of blackberry jam. Prisoner of Azkaban did an excellent job of this; hiding a major twist of the Voldemort storyline in the seemingly comical tale of Ron’s scruffy pet rat.

I’ve said it once and I’ll say it again: your readers are a clever bunch — and they know it. They’ll be constantly on their feet, trying to predict your next move: where the plot is headed; who’ll end up with who; and whether you left any Toy Story references in your dialogue. And of course, you can use that very fact against them.

A red herring is a false clue that’s meant to throw your reader off the scent — and just like with a real herring, it’s good practice not to hit your reader over the head with it. You want them to think they figured out something you were trying to hide; that they’re the amazing detectives-slash-geniuses who managed to figure you out.

When their hopes are up and their egos are stroked; when they think they’ve seen right through you; when you’ve got them exactly where you want them: it’s time to strike. Pull the rug out from under them. Tug on the puppet strings that were there all along. You’ve built up to this for chapters and chapters and chapters — now drop the hammer, and make it brutal.

That kindly elderly couple across the street? Boom, devious foreign spies all along. That ragged-looking dock worker? Nope, a poetic, noble land-mermaid. That terrifying walking hot dog monster? Just a puppy in a hot dog costume.

But hey, we’re not done yet. A plot twist isn’t just about the twist itself — it’s about everything that comes after.

Like anything in your novel, there should be more to your plot twist than shock value alone: it should move the story forward in one way or another. This means that once the oohs and ahhs have subsided, it should have fundamentally changed your plot or characters in new and interesting ways.

Luckily, this is where your previous groundwork-laying comes in. Because your plot twist was organically woven into the rest of your story, it won’t just be your reader who’ll have to re-examine everything that came before: it’ll be your characters too. Can they still trust who they trusted before? Was their heroic act really a horrifying mistake? You just violently turned their bed upside down: now force them to lie in it.

With all that being said: there’s some battles you can’t win. You readers are worthy adversaries, after all — and, if things go well, there’s a lot of them.

However well you hide it, there will still be that one in a thousand that perfectly predicts your ingenious twist. And while that may make your inner mastermind feel somewhat slighted, it’s important to know when to accept defeat. Yes, that one reader might not have had the exact experience you intended. And yes, they may have even enjoyed your novel slightly less. C’est la vie. It’s part of the job.

It’s tempting to try and outsmart them, but for the love of all that is spherical: keep your pants on. Many a novel has been ruined by the author throwing in impossibly complicated plot twists; obsessing over that one-in-a-thousand reader that outsmarted them, while completely ignoring the 999 who had a wonderful time. Push come to shove, a great plot twist isn’t one that fools every single one of your readers; it’s one that makes your story more enjoyable for the far majority of them.