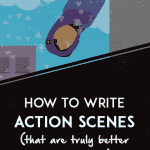 Whether they involve light sabers, monster trucks or a blood-stained Sicilian wedding, action scenes are often among the most memorable of cinematic moments. They can make us creep towards the edge of our seats, bite our nails until our fingers bleed and sometimes, just sometimes, have us gracefully soil our pants in the middle of a crowded theatre.

Of course, with state-of-the-art special effects and tailor-made musical scores, the director’s toolbox is a lot heavier than that of the humble writer. While we may insist that the book is always better, the hard truth is that literary action scenes often fall flat beside their big screen counterparts. Still, that doesn’t mean you should shy away from writing action scenes, nor should you settle for kinda-okay. Truth is, words-on-paper can be better than explosions and Bruce Willis — as long as you learn to do them right.

The first thing to remember is that when push comes to shove, action scenes are just that: scenes. And like every scene, they’re of no use to the reader unless they somehow move the story forward. Whether it’s a car chase through Manhattan or the bloody end to a year-long siege: action scenes are much more powerful once we know what’s at risk.

In fact, such emotional stakes are what make us root and clench and gasp, and the reason we find ourselves turning those pages in a frenzy. They’re what draw us into the heat of the story, and make it nearly impossible for us to be drawn back out. So before shit hits the fan, make sure we know what happens if our heroes make it out — and more importantly, what happens if they don’t.

Make it all a vivid blur

Too often, I see authors describe an adrenaline-filled pursuit in excruciating detail: every punch thrown; every corner turned; every shard of glass as they crash through a warehouse window. The more you linger on such needless details, the longer your readers have for the goosebumps to fade away. When we’re in fight-or-flight mode, we only notice what’s most vital for our survival — and the most powerful action scenes end up doing the exact same thing.

On a similar note: your characters will rarely have time for some drawn-out monologue or a bunch of witty quips. More often than not, such clichés will break the tension of a scene, and often just feel awkward and out of place. Sure, they can work, but only if you happen to already be writing some cocky Han Solo-type antihero. The bottom line here: shape the dialogue after your characters, not the other way around.

Use all your senses

Your characters can do more than just see, and their heightened senses should give you plenty to work with. There’s the taste of mud as they’re launched head-first into a puddle, or the lingering pain as their muscles grow sour. Describe the smell of hot asphalt as they slide underneath a truck, or the sticky sweat as they heroically tremble and shiver.

In addition, good action scenes should cause a flurry of emotions in your characters, and cloud most rational functions outside of their most primal reptilian brain. They might go from fearful to elated and from mournful to livid over the course of a single scene — and if you’re going for that Oscar, they should probably do just that.

Given all the splendour they’ve brought us, it’s no wonder we sometimes look to movies for inspiration. Still, film directors often face a ton of limitatons, including budget constraints, scheduling conflicts and those pesky laws of nature. As a writer, you could stick to the same-old courtyard swordfights or highway chase scenes — but there’s no reason to think you have to.

If it makes sense for your story, don’t be afraid to pull out the big guns to spice up your scene. Set entire forests on fire, have longships appear on the horizon or make your armies flood a city. You are, after all, nothing short of a pencil-wielding god — and your special effects budget is exactly the size of your imagination.

While you may think action scenes are mostly about gratuitous kick-boom-woosh, they’re actually an excellent place to explore your characters. Not by having them reminisce as they walk away from an explosion, but by showing us how they react when the stakes are highest.

And don’t go thinking that means flawless heroism, either. Sure, dire straits might be where characters find their courage, but it’s hardly the most surprising outcome of a perilous situation. Instead, use the opportunity to introduce something truly surprising: a love for their estranged kin; a paralyzing fear of bees, or even an undiscovered cruel streak. And should you go the heroism route anyway, at least realize this: true heroism isn’t about always being brave; it’s about facing fear and overcoming it.

Finally, all of that spectacle should have some sort of outcome. No matter how thrilling you make your scene: we’ll still feel cheated if the world hasn’t changed just a little once the dust settles. That means a positive resolution should still come with drawbacks: an injury; the loss of a friend — anything that propels the story forward. Similarly, a crushing defeat should still lead to new opportunities: a new skill; a desire for vengeance — perhaps even a daring rescue mission of sorts.

Whichever way you end up going, make sure it’s clear to your reader that the best is yet to come. By ending on a cliffhanger, you’ll avoid your book being happily put aside — and instead channel that adrenaline into more frantic page turns.