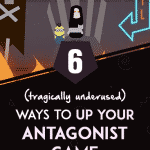 When we first start crafting our main characters, most new writers spare no expense. We sculpt them from the clay with our bare hands; carefully polish the most minute of details, and then sprinkle on glitter before sending them out into the world. From best friends to biggest fears and from first loves to lingering childhood traumas: for most of us, writing round protagonists is like second nature.

Unfortunately, the same can not be said for antagonists.

And that’s kind of odd, when you think about it. Sure, they don’t always get the same amount of page time as your protagonists, but a cringeworthy bad guy can break your story just as quickly as an uninspiring lead. They’re an essential part of your story, even when just lingering in the shadows; an ever-looming threat that forces your main characters to develop and grow. They’re the engine to your story — here’s six different ways to get them right.

Understand what drives them

Let’s start with what should be glaringly obvious, but far too often isn’t. Understanding character motivation is Writing 101 when it comes to our protagonists, yet somehow we skim over it when it’s our antagonist’s turn. More often than not, we settle for destroying-the-world-for-funsies, or some petty rivalry between our hero and the baddies. Such flat motivations will have your reader snoozing before the chapter’s end — but fortunately, there are far more interesting angles to explore.

Now, don’t get me wrong: there’s nothing inherently wrong with ambition, jealousy or childhood trauma as a driving force. However, they’ve been go-to villain motivations for centuries, meaning it’s a lot harder to find a spin that’s even the slightest bit intriguing. Instead, try spending time fleshing out your antagonist’s backstory, much as you would for your leads. After all: the more you know about them as people, the more naturally their motivations will start to surface.

Did you ever wake up and think “let’s just be a total jackass today?” That’s right, you didn’t — and neither did your antagonist. Even if they’re doing something reprehensible, ten bucks says that’s not the way they see it themselves. From your antagonist’s point-of-view, anything they do is morally right — or at least somehow justifiable. As the writer, it’s up to you to figure out why.

Now, the cheap escape would be to just take away their sense of compassion; to make them so desensitized to human emotions that anything seems A‑okay. And that can work, potentially, but it’s much more interesting to give them some sort of moral code. After all, if they’re round characters, there’ll be plenty of things that rub them the wrong way, and even some they find appalling. There’ll be situations that make them feel unsettled, or even straight-up terrified. The rule of thumb here: if you were to flip the story and tell it from your antagonist’s perspective, it should all still pretty much work.

I’m sure you did a double-take there, but you did read that right: antagonists don’t necessarily have to be bad guys. After all, by definition, they’re nothing more than the person who keeps your main character from reaching their goal — even if that goal isn’t among the most wholesome of endeavours.

Just because two characters are on opposite sides, doesn’t mean either has to be morally wrong. If your parents ever withheld dessert for not eating your veggies, they sure as hell were the antagonists in that particular dinner scene — yet they’re also the reason you haven’t Violet Beauregarded up to three times your size. Morally good antagonists not only help make your reader feel wonderfully conflicted, but it also forces them to see the protagonist in a different light — and question their own allegiance.

Now, say you disregard most of the above, and your antagonist does go full genocidal-maniac: that doesn’t mean they have to become some flat Evil Overlord stereotype. Whether it’s The Joker, Cersei Lannister or Sméagol-turned-Gollum: some of the most intriguing antagonists are the ones we can’t help but root just the tiniest bit for. Of course, that doesn’t mean going straight cotton candy fluff, but adding just a dash of charisma, charm or likeability can still help your readers feel conflicted — and keep turning those pages.

History is full of decent people making bad decisions, and when it comes to antagonists, your novel should too. Understanding how a villain came to be can make them a lot more relatable, and in turn, a lot more compelling. For one, we’ve all screwed up at one point or another, meaning that it’s a lot easier to relate to once shit starts hitting the fan. Besides: if we know there was a time before whatever dark path they went down, there’ll be part of us that secretly hopes for redemption — and keeps us on the edge of our seats.

Many times, we default to splitting our stories straight down the middle: good guys on one side, bad guys on the other. In real life, however, things are not nearly as black-and-white as all that, with countless shades of grey being scattered in between.

In fact, there don’t even have to be just two sides. Antagonists can be opposed to one another, if they’re round enough, or even collaborate with the protagonist to defeat a common enemy. The A Song of Ice and Fire novels are notorious for their intricate web of opposing sides, being crafted so skillfully that you might just root for both sides of a battle. Now that’s intriguing.