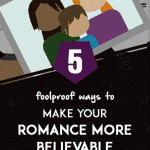 Whatever kind of novel you’re writing, including a love story can seriously up your writer’s game — when done right. When done wrong, however, that very same love story can just as well toss you down a very rocky mountain of embarrassment. Assuming that nobody wants to be tossed off such a mountain to be eaten by vicious reviewers, here’s five pointers on how to write a believable romance that will have readers swooning long after they’ve turned the last page.

1) Start with an interesting premise

It may seem obvious, but when writing romance, it’s essential to first be excited by the story you want to tell. Go through your list of all your story ideas, and think of each and every one as a friend you will be spending a lot of time with for the next few years.

The story premise you pick should be romantic, yes, but it should also have the ability to carry itself independently. Because at some point in the future, as you’re wading through your first draft, you’ll likely have the urge to click that X button in the top-right corner, and forget about whatever it was you once spewed out onto the page. If there isn’t a strong foundation that motivates you to finish what you started, your story will turn into a did-not-finish that will mar your conscience forever.

Mary Sues and Gary Stus, as such characters are called, are predictable and unrelatable. Your love story will not make people’s hearts beat if it’s between a perfect, beautiful princess-who-does-no-wrong, and a perfect, handsome prince-who-does-no-wrong. See how dull that sentence was?

Instead, make sure that your protagonists have believable flaws and character arcs that develop as the plot unfolds. If you are writing about a princess, perhaps make her the kind of princess nobody wants to be their next queen. As for the prince, perhaps give him some questionable morals — say, wanting to murder his step-father for treason. Once you have a healthy list of flaws and complications in place, let the fun of making them relatable and in love begin.

3) Put real obstacles between them

Obstacles are where conflict is born — and when I say ‘obstacles’, I don’t mean a one-page fight that gets resolved the next page. You can have quarrels, sure, but make certain they have some kind of real impact on the love you’re writing about. Think to yourself: what purpose does that quarrel accomplish? If you don’t have a legitimate answer beyond adding drama, ditch that scene.

It’s essential to make sure the obstacles tie in with the bigger conflicts and themes of your story, be it a rich playboy’s judgemental family or a string of alien attacks to keep your couple on edge. Every romantic fight, just as any fight scene, will be far more interesting when it has real stakes for your reader to be invested in. Use your couple’s fights to reveal something about themselves and their relationship, and ultimately help them grow into rounder, more interesting characters.

In essence, a cliché is simply not knowing your subjects well. It is coming up with a concept based on another story, and trying to recreate its success with only a superficial level of knowledge. Simply put, it is cheating, and your readers can tell.

Don’t get me wrong: when done correctly, romantic clichés can definitely work for your story, but all too often they’re sloppily executed. This douses the amore in a fire-resistant coating that makes it impossible to start a spark — much less a fire. If you must use them, make sure you add a fresh, unexpected spin to it.

One way to have a fighting chance is to do research — and a lot of it. Shed that superficial knowledge for an in-depth one, and it’ll open up a plenty of ways to turn the cliché into something new. Say you’re writing about love at first sight: what you might do is read about real-life stories, and research the psychology behind it. Figure out how and why and when it occurs in real life, and use that knowledge of hormones and feelings to make new iterations that will wow your audience.

5) Don’t rush it and ruin the magic

This one’s important: stop trying to get to the kissing scenes without doing all the work, for goodness’ sake. Be patient with your characters. Take the time to fall in love with them, and discover all of their endearing quirks. 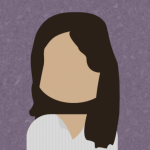