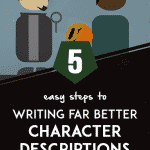 So here’s a pretty cool thing about the human species: the moment we meet someone new, our minds go into this instant cyborg-like analysis mode. With one quick scan we’ll spot their ragged shoes; their flawless makeup and the confidence with which they carry themselves — and in a matter of seconds, we’ll have a pretty good picture of who we’re dealing with.

Unfortunately, most of those first impressions happen subconsciously, and so it can be surprisingly tricky to recreate them in your writing. Even still, describing your characters is a skill very worth practising, because clunky character descriptions can instantly turn your novel into a tedious piece of fireplace fuel. Here are 5 easy steps to avoiding just that.

1) Start out with what stands out

Let’s do a little mental exercise. If I were to walk up to you, right now, in a glorious purple giraffe costume, what would be the first thing you’d notice? Would it be the colour of my eyes, or the height of my cheekbones? Would it be my locks of hair brushing gently in the wind?

Of course not. Giraffe costume.

In writing, the same logic applies. Start your character descriptions with whatever stands out most, then work your way down the list by order of prominence. It could be a lazy eye, or untied shoelaces, or even just the arrogant air they have about them. Not only does this help instantly draw your reader in; it also burns a clear, memorable picture in their mind. After all, you only have one chance to make a first impression.

2) Move beyond the basics

If at any point in your writing career you’ve tried your hand at character descriptions, I’ll bet you my giraffe costume that you’ve described both someone’s eye colour and their hair colour. And don’t worry, that’s perfectly natural — historically, they’re the features we’ve listed on official documents and passports, and so we’ve come to see them as cornerstones of human appearance.

Thing is, your characters likely don’t work in airport security, and so it’s rare for these features to be especially meaningful or distinctive. The best descriptions move beyond just basic biological features, and focus instead on traits that are meaningful and unique. Consider what this person may have been through, and how that shapes the way they look. Is there anything in their posture that gives away their personality? Any trinket they cling to religiously? Any scars they picked up along the way?

What’s more: your characters evolve over time, and their appearances can be a powerful way to reflect that. A person who looked shaggy at first but has now cleaned up nicely is likely to pique our interest, as does someone who walked the opposite path.

Which brings us to another major aspect: your point-of-view character. There’s a fair chance you’re describing people through your protagonist’s eyes, which is a great opportunity to give us a glimpse of their personality or current state of mind.

Because here’s the thing: as people, we don’t see wide-set eyes or high cheekbones; we see stern or handsome or tired-looking. So unless your POV character has a Sherlock Holmes-like detachment from emotion, it’s their descriptions are going to be infused with meaning and judgement.

Better yet, let your POV character inform what features you focus on. If they’re intimidated by the person they’ve encountered, they might focus on how that person towers over everyone around them, or the weapons they have hidden under their clothes. If it’s someone they see every day, you might skip their basic appearance altogether, and focus exclusively on what mood they seem to be in that day.

4) Keep it short and sweet

This may seem like it’s counteracting everything I’ve said before, but it’s perhaps the most essential advice I can give you: keep your descriptions lean and to the point. Your goal here is to paint a vivid picture in your reader’s mind, not hand them an exhaustive list of factoids about this person. You’re writing a novel, not an encyclopedia, and often times two to three features will give your readers plenty to go on.

Of course, not all characters are created equal, and the length of your descriptions can help guide your reader’s attention. Generally speaking, you want to spend more time on people who are especially meaningful to your POV character, because it helps convey importance and status. For characters that are recurring throughout your novel, you have the extra option of spreading out your descriptions: focus on the most prominent features first, and then add in smaller details on their later appearances.

5) Use it for world building

Fair warning: this one’s a bit more advanced. But for those of you who really want to go the extra mile, thoughtful character descriptions can add just that extra touch to your world building. It might not apply to every kind of story, but there are a number of authors who do a great job at giving specific descriptions a unique meaning in their story world.

Angie Thomas’ debut novel The Hate U Give uses sneakers as a way to convey culture, origin and status, which are central themes throughout the story. George R.R. Martin’s A Song of Ice and Fire, is full of family crests and house colours, showing the excessive value Westerosi society places on heritage and displays of wealth. Of course, we all know the Hogwarts house colours, galactic hitchhikers’ towels, and — well, you get the point. Use it to your advantage.