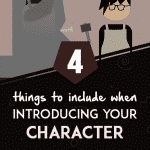 If you’ve ever read a remotely compelling book, you’ll know that there’s a fine line between casual fictional characters and straight-up imaginary friends. Miraculous though it sounds, the course of a few-hundred pages is all it takes to make us bond with words-on-paper, building relationships that feel eerily impactful and real. Sure, our rational minds know it’s all just smoke and mirrors, but our starry-eyed hearts will gladly believe these people have existed since long before we picked up the book.

Of course, the reality of it is not nearly so magical. In truth, a whole lot of thought went into making those words feel like people, starting with the very moment you first crossed imaginary paths. You may have felt an instant connection to this person, or immediate disgust, or perhaps you got sucked into the story just trying to figure them out. Whatever it was, that first character introduction set the stage for the relationship that blossomed after — and now that you’re a writer, it’s your turn to do the same.

Such establishing character moments have to strike a delicate balance; being unique enough to be compelling to your reader, yet obscure enough to keep them coming back for more. And while there’s no cookie-cutter blueprint for making a solid first impression, including these four elements should get you a long way.

Something that defines them

With all the layered, three-dimensional goodness we try to instill in our characters, it can be surprising how much of their essence can be captured in a single character trait. Whether it’s Pippi’s free spirit, Sherlock’s flawless reasoning or Fred and George’s penchant for pranks: showing just the smallest nugget of information can give us a remarkably accurate sense of a person.

The reason this is so important is that as readers, our minds will form a fully-shaped person with however much information you’ve given us so far. In that sense, building a character is like carving a sculpture; starting out with a full block of granite and then chiseling in the details as the story progresses. The character introduction, then, is your first swing at that untouched granite; a rough outline that gives us just the faintest idea of what we’ll end up with.

Your establishing character moment, then, should show this defining personality trait in action. And I say show, not tell, because that info dump‑y childhood memory is not nearly as compelling as you think. Instead, show them doing something typifies them, be it haggling over a price, tripping over their feet or simply being a noble dwarf in a whorehouse. If it fits in organically and puts their character traits on display, you’ve yourself got a winner.

Now that we have a sense of who this person is, it’s important to know what gets them up in the morning. Every character has a motivation, after all, and every motivation is a reason for your reader to care. We can’t help but feel involved once we know what to root for, so your goal here is to do just that: grab us by the collar and drag us into the story.

Again, though, this is about rough swings at the granite, meaning there’s no need to lay out their ten-year plan just yet. ‘Adventure’ or ‘a sense of belonging’ are plenty detailed for now; broad enough for us to relate to, yet obscure enough to hint at how there’s more beneath the surface. If it truly is their driving force, it won’t be too hard to fit it organically into whatever scene you’ve established — after all, it’s only human to dream of greener pastures. Perhaps there’s a trinket they hold onto, or a colleague that inspires them, or even just a memory they cherish — anything that triggers their sense of longing will do just fine.

Something holding them back

Which leads us to the third element. For anything your character wants, there’s a reason they don’t yet have it — and by extension, a reason for your story to start moving forward. Now that we know who they are and what they want, it’s time to set the stakes and set them high.

By showing a hint of what this person will have to overcome — whether it’s a rivalry or an arranged marriage or their own inner demons — you’re letting us know to buckle up for whatever ride we’re in for. Again, subtlety is key: have them deal with a related issue, or the calm before the storm, or really anything that can serve as a precursor for the shit that is yet to hit the fan.

Something that sets them apart

You might leave it at that if your character were stuck on a desert island, but for most stories, there’s one last kink to be ironed out. As your cast of characters grows, so does the need to make each of them memorable and unique. After all, each character brings their own set of traits, motivations and conflict, and with imaginary friends fighting over page time, poorly-defined characters risk getting blended into a beige mess of vanilla nothing.

Your character introduction is the ideal moment to anchor this person into your reader’s mind; to have them do something that your reader will remember the instant they re-enter the page. Whether it’s a quirk or a tic or having a kitchen tool for a hand; the better your readers remember the character, the sooner they’ll be able to fall in love.