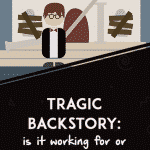 When I look back at the childhood stories I grew up on, it’s hard for me to think of a protagonist who had a tragic backstory — and even if they did, it wasn’t touched on much. At most, it was a line or two of exposition, before the real meat of the story got introduced. It wasn’t until I got older that forms of tragic backstory started entering the lives of the characters I would come to hold dear. Harry Potter and his parents murdered by Lord Voldemort. Buffy and her desperate desire to be a normal girl.

These days, it seems like every single character that comes onto the page — or the screen, in many cases — has a tragic backstory. It’s rare to find a complete third party, a la Bilbo Baggins, who has no worries in their life until it is thrust upon them and they take up the call to arms. We have become saturated with it, it’s something we expect now — a character feels incomplete without some sort of childhood trauma. It’s practically a rite of passage for new writers to craft a protagonist who is an orphan, and is oh-so emotional and deep because of it.

Now, mind you, I’m not saying that tragic backstories are always bad; far from it. But when things get popular enough to be everywhere, we risk getting into the realm of cliché. So with this in mind, let’s learn how to break the mould of tragic backstories, and craft something truly unique.

The anatomy of a tragic backstory

It’s hard to tell whether tragic backstories have reached peak popularity in recent years, or if we simply become more aware of them as we grow older and read more mature literature. Whether or not their popularity is recent, the fact is obvious: tragic backstories are popular. Every hero, every villain and practically every innkeeper-in-a-fantasy-setting now has a tragic backstory.

Why? Well, because it’s interesting; because it easily adds depth to a character and gives the audience something to empathise with. But most importantly: it immediately adds conflict. Whether that conflict is internal or external, the character that has just been introduced now has some modicum of conflict, and in doing so propels the story forward.

Tragic backstories actually are immensely helpful for writers. Let’s say, as an example, that the hero is a prince, and the villain is his evil uncle intent on stealing the throne. The uncle poisons the prince’s father, the king, usurps the throne, and exiles the prince. Boom! Just like that, we have our conflict, our hero, and our villain lined up, and we can begin the story of prince’s quest to reclaim his kingdom.

The downside of tragic backstories

Of course, the fact that it’s so straightforward is the exact reasons clichés are always lurking about. Have you ever rolled your eyes at some overly-broody protagonist who just wouldn’t shut up about his troubled past? Many protagonists fall into this category, to the point where it becomes agonising to read through their constant stream of “woe is me.” At some point, the story has to pick up and move along, or the reader will be trapped in the same headspace for far too long — and eventually get sick of it.

If you’re into fantasy or superhero stories, you may have also encountered this one: a new character shows up, and you’re just waiting for them to talk about how they lost their parents in some unexplained fire. It starts feeling like a drinking game, almost; “see how long it takes for someone to bring up their past tragedies.”

The thing is, if every character has a tragic backstory to deal with, they will very quickly start losing their impact. Rather than be about the actual story you’re telling, your novel becomes a challenge to the reader: to see how long they’ll last against the barrage endless barrage of emotional turmoil that your characters keep whining about.

How to avoid the trauma dump

Of course, none of this is to say you shouldn’t write tragic backstories: it’s a pressing advice to be careful with them. The best way to know when you’re falling into clichés is to read expansively, and get a feeling of what’s been done to death. Take note of the stories you read, especially when they do tragic backstory well — - and when it takes its toll. Of course, this is real life, and not all of us have hours a day to devote to reading. So, to supplement, here’s a short list of suggestions to keep in mind when writing your tragic backstory.

First, try not to bring it up more than four times per book — - your character doesn’t need to revisit it whenever they meet a new person. Instead, it can come up in a meaningful conversation, or in a group meeting, or in a motivational speech before the final battle. If you are writing a series, try not to talk about it too much in the books after the first one — your reader will remember, and will be able to make connections on their own.

Second, try to think beyond the “orphan angle”. This has been done to death, and unless done exceptionally well, tends to feel immediately feels stale. If you have a solid reason for it, try to work with it and see where it takes you, but know that you’ll be swimming upstream.

If you’re really adventurous, try having a character with no tragic backstory at all. They don’t have to be happy-go-lucky, either; they can just be a regular person who gets swept up in your story. Whether that be the hero, the love interest, or the best friend, give it a try. It will be refreshing for both you and your readers. 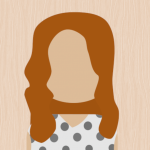