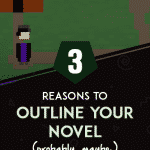 The advice I’m about to give is intended for the writer who hasn’t decided whether they write at noon or at midnight; with a pen or with a keyboard. And there are master authors who have never followed this advice, but for every one of them, there is a master author who does:

You should (probably, maybe, only if it suits you) outline your novel. (Maybe.)

Persuasive, I know. But maybe the following points will help convince you to give it a shot.

Chances are, if you’re a new writer, you’re diving into your idea head-first. You’re getting it onto paper, in which case, kudos to you! You’re already doing more than a great many of us. But the chances of you getting lost along the way are pretty high. It’s much easier to finish an outline than it is to finish a novel, and what is an outline if not a novel’s bones?

An outline is a guide. It represents the most important part of your novel – the story – and is a means to organize your ideas, making the actual process of writing your novel much easier, which brings me to my next point.

If you’re a first time writer, you more than likely hold some level of emotional attachment to your draft. It’s your precious! You’ve never written this many words in your life! Getting this far is a feat on its own; you couldn’t imagine putting a hacksaw to the product of your blood, sweat, and tears.

But you will probably have to.

They call it “killing your darlings” for a reason. It’s much easier to revise a nine-thousand-word outline than it is to edit a ninety-thousand-word novel. It’s also easier to correct plot holes and weak spots when you aren’t attached to whole chapters and acts.

The outline gives your a bird’s‑eye view of your novel, helping you to get the bones of your story right the first time without having to figure out fifty-thousand words in that you’re going in the wrong direction – which brings me to my last point.

Forty-thousand words are nothing to sneeze at – and that’s commonly the minimum word count for a piece of fiction to qualify as a novel. That isn’t considering genre, because if you’re writing fantasy or science fiction, the average word count is over twice that.

Beyond the impressive amount of time and energy required to tackle this beast, you’ve got to craft a believable cast of characters. You’ve got to create an immersive world. You’ve got to come up with a story that’s well-paced and exciting, and you’ve got to write it in a way that integrates it all purposefully and efficiently. No pressure, of course.

Now, outlining isn’t a fix for this pressure, but it is a relief. Throw your ideas out there and see what you like. Make your mistakes there and fix them without the burden of having to rewrite tens of thousands of words to accommodate for it.

Your grain of salt

I’m a hardcore outliner. It compliments my anxious and totally-charming-but-admittedly-perfectionist tendencies. Not every writer is an outliner, though, and novels that come from outlines aren’t necessarily of higher quality than those that don’t. Outlining is one of many ways to further organize the writing process.

If you’re like me and you like to have everything figured out before diving in, then maybe outlining will make writing your novel a crap-ton easier for you. If you’re a devil-may-care writer who does their work in spurts, then by all means! Continue! No two writers’ journeys are the same. And in the end, it isn’t about how we write the thing as much as it is that we write the thing.

So, outline or no, write the thing.

This post was originally published on Crit & Pen Editorial.