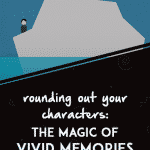 Last week, we hosted our first-ever flash fiction contest, asking you to respond to a single writing prompt: describe your main character’s most vivid memory. Hundreds of writers heeded the call, submitting wildly varied stories from all around the world. Tales of tragedy, romance and joy all made an appearance, giving us brief but wonderful insights into the wide range of storyworlds you’ve been crafting behind the scenes.

Of course, that was far from a random writing prompt. Vivid memories are one of the most essential things you can write as an author, and a particularly valuable exercise in getting to know your characters. Even if you don’t include them in your final draft, the fact that you’ve explored your characters’ pasts will make them feel so much more lifelike to your readers. Here’s the three reasons why.

It shows where they come from

Let’s start with the obvious: memories show where your characters have been in the past. In a physical sense, sure, but their dreams, priorities and worries of old are just as important. After all, life is nothing but an endless array of trial and error, and your character has been chiseled and polished into the person they are today. By exploring the raw granite that they once came from, you’ll establish that they haven’t always been as they are now — and that they’ll continue to change throughout your novel.

Now, there are many bygone eras you could go to, and what works for you is highly dependent on the kind of story you’re writing. Personally, I’ve found that childhood memories tend to be particularly profound, because they shape your character in a time when they’re most susceptible to being shaped. One tiny event way-back-when can snowball into another and another and another, bringing about a chain reaction of character development that feels both realistic and intriguing.

It shows what matters to them

This may seem counter-intuitive, but what your characters remember tells us just as much about the present as it does about the past. After all, memories don’t just stay vivid without a reason; they do so because they somehow matter to your character. The fact that they remember something, after all this time, gives us a brief but valuable insight into who they are as a person.

Now, when you write such a memory, you may be tempted to search for the extremes; for murder and injury and blood-stained trauma. And while there are certainly ways to make those work, they do have one major flaw: they say very little about your character as a person. After all, an event like that would be a vivid memory to just about anyone, meaning we learn all but nothing about what sets this particular individual apart.

Much more interesting is to take something seemingly mundane, then show us why it matters to your character in particular. It might be their first pimple, or losing a football match, or that time they tripped and ran into a lamppost. Things that, at face value, could seem utterly unimportant, yet for one reason or another mean the world to your characters. It’s these kind of memories that tend to draw us in, and that feel truly original and unique to your story.

It shows what drives them

Now that you know where your characters come from, figuring out where they’ll go will come a lot more natural. Perhaps there’s a feeling of accomplishment they’ve been chasing, or a childhood dream they’ve been struggling to follow up on. It might be something they’re after, or something they’re running away from, or perhaps even a little bit of both.

Whatever it is, writing vivid memories is just about the most useful thing you can do to turn cardboard characters into real people. Pretty soon, you’ll find them making decisions that are just odd enough to be intriguing, yet still grounded enough to be realistic. They’ll start to surprise you in ways you never thought possible — and lead your story in a direction far better than you could’ve ever planned out.